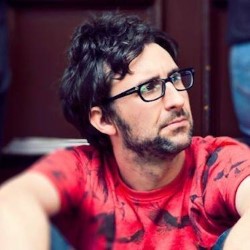 Last year in Pleasance Courtyard, Flaws sold every ticket. It ended up going on an enormous 100-date UK/Australia tour including a triumphant run at the Melbourne Comedy Festival. Now, the most personal, best-reviewed and most popular show of Watson's career comes back to the place where it began, for two final, enormous, special edition performances including a chunk of new material alongside last year's big hitters. If you missed it, and you miss it again this time, you're acting very oddly. 'Terrifyingly funny' **** (Times). 'Belly laugh brilliant... The audience was weeping with laughter' ***** (Time Out).

Multi award-winning Mark Watson will be performing his critically acclaimed sell-out show Flaws live for a final time this August at the Edinburgh Festival Fringe, Pleasance Grand. Mark has marked his ten-year anniversary in comedy in style this year: As well his sell-out run at the Edinburgh Fringe 2014, 65 date national tour and run at the Melbourne International Comedy Festival, Mark has recorded Flaws for a DVD due out later this year.

Combining his award-winning wit with thought-provoking insights, Watson finds that as humans, despite our lack of perfection and poor decision-making, we're pretty spectacular. He may not have all the answers to life's most serious questions, but Flaws has humored and touched every generation of comedy fan across the country (and Australia) over the past year.

Now aged 34, Watson is poised to look back at his life and reflect on growing up - including the terrifying aging process, parenthood and the fear of passing ill-fated traits onto your children. In this personal, thought-provoking adventure, Watson explores human character defects and the effects his own considered flaws have had on his life.

Mark is one of the most celebrated comedians on the UK circuit, he has been nominated for Best Newcomer at the 2005 Perrier Awards, won the Panel Prize at the 2006 If.comedie Awards, as well as being nominated for a Barry Award at the Melbourne Comedy Festival and winning the Time Out Critics Choice Award in 2006.

Mark has recently hosted Road To Rio on Dave TV with Henning Wehn. His other TV credits include co-hosting BBC 4's We Need Answers alongside Tim Key. Mark has also regularly appeared on BBC 2's Never Mind The Buzzcocks, BBC 2's Mock the Week, BBC 1's Would I Lie To You, BBC 1's Have I Got News For You and Dave's Argumental. He has also performed stand-up on BBC 1's Live At The Apollo and Michael McIntyre's Comedy Roadshow as well as Channel 4's Comedy Gala.

Mark is also a successful author having written four novels to date, Bullet Points, A Light-hearted Look At Murder, Eleven and The Knot. Following his efforts to halve his carbon footprint, he also wrote the book Crap At The Environment.