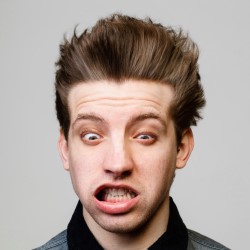 Mark Smith (Nick Helm's Heavy Entertainment, Russell Howard's Good News, car owner) is back with a brand new show. Expect to hear him bang on about tattoos, all night petrol stations and the ways in which he can improve himself and not feel like he is simply treading water as his life rushes past him at a terrifying rate. Don't panic though, there's also a couple of dick jokes. 'One to Watch' (Guardian), 'Gleeful wordplay ... obvious talent ... a keen eye for untapped sources of funny' (Chortle.co.uk), 'Consistently sharp' (List).

Mark Smith returns to the Edinburgh Festival Fringe with second solo show; Log Flume. After a short fringe hiatus, Mark will be performing as part of Freestival, joining the many comics who are bringing talent to the free fringe. Having been performing stand-up for almost 6 years, Mark is a known talent in the London scene and this show proves his abilities as an established comic.

Since reaching a milestone in his life Mark is trying to avoid some kind of pretentious L.A. self-improvement technique but is very aware that something absolutely has to change. Log Flume is Mark's exploration of the ways in which you can get by without sounding like a dick. A naturally funny and relaxed performer, Mark is able to take his audience through his acute observations and self-reflection with the confidence of a gifted comic.

As well as being an established comic on the London circuit Mark has written for and performed in Nick Helm's Heavy Entertainment (BBC3) and appeared on Russell Howard's Good News (BBC3). Mark has also presented for MTV, written for 8 Out of 10 Cats (Channel 4) and written and performed for Dick and Dom's Funny Business (BBC2).

Mark has performed as part of the prestigious Comedy Zone, which has produced some of the UK's best comics (previous alumni include Stewart Lee, Al Murray, Harry Hill). Mark has also supported Russell Kane on his sell-out UK Tour and was a finalist in So You Think You're Funny competition. When he is not gigging Mark also presents the online clip show for the People Are Awesome channel on YouTube, which has over 250,000 subscribers and regularly receiving more than millions of views each week.