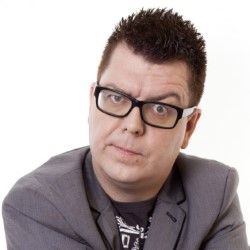 Whoops! How careless can one man be? He's lost his wife, flat and two cats, but at least he's still laughing... Hysterically. Ex-Nickelodeon presenter, guitar nerd and self-confessed man-child Mark Felgate combines ventriloquism, musical mayhem and general silliness as he unleashes his inner idiot on the world. Mark is thrilled to be allowed to talk non-stop for an hour, as he spends much of his time in silence as one half of internationally renowned visual comedy act Men in Coats. 'Right on the funny bone, and his voice-throwing talents are very original' (Stage).