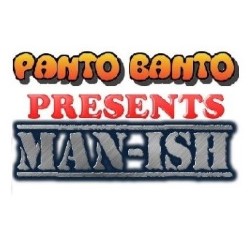 Man-ish has taken seven popular pantomimes, filled them with adult jokes and made a challenge to perform the whole show in under an hour. Starring four upcoming comedy actors including GK who is appearing in a new musical, Billy who has performed alongside a Glastonbury headliner, Campbell who has performed on the streets of Edinburgh at the Fringe 2013 and Sophie who has created the magnificent set and props seen throughout. After proving popular with southern audiences, producing two pantos, Man-ish has a mess scene which ends up with 500 pies being thrown, all of them in Billy's face!