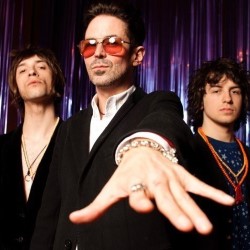 The Church of Malcolm is a live rock gig sprinkled with a Kurt Vonnegut like worldview. Malcolm's returned from the brink of death with certain revelations on the Cosmos and the very nature of being. Like a more positive take on the Rocky Horror Show. Malcolm and his band of disciples engage you the audience as a non-denominational congregation, spreading love and positivity through the vibrations of music! The band will be joined, live on stage and on screen, by special celebrity guests.

The following is a true story...

Malcolm, usually the life and soul of the party, wasn't feeling well. Not well at all. He was losing weight and had no energy. He went to see his doctor, who sent him for tests.

A few days later Malcolm got a call and the doctor gave it to him straight: "Malcolm, you have leukaemia."

The intensive chemotherapy that followed destroyed Malcolm's immune system resulting in a life-threatening situation. While The 'Angels of Kings College Hospital' worked to save his life, Malcolm's friends came to him in visions of music and love - familiar faces in an unfamiliar situation.

And now he has a message for us all:

You're alive! And isn't life fantastic?

The Church of Malcolm is a unique theatre presentation. A live rock gig interlaced with a positive world view and a narrative about returning from the brink of death with certain revelations on the very nature of being and the Cosmos.

Malcolm and his band engage the audience as a non-denominational congregation, spreading love and positivity through the vibrations of music! Imagine the experience of going to church except without the dogma, the 'God' bit.

The show incorporates a colourful visual spectacle through the use of projections, graphics and movie sections which accompany a set of catchy and uplifting songs from the forthcoming Church of Malcolm album.

There are 8 musical numbers and the band will be joined onstage by special guests on certain songs both live and on film.

And all the while Malcolm plays the role of The Reverend, engaging the audience throughout.

The music is dynamic and inspiring and the energy positive and infectious. You will leave feeling better about yourself and your place within the Universe.