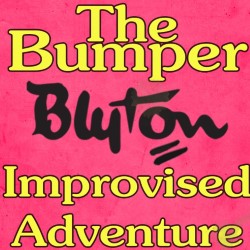 The picnic hamper's packed, it's time for a jolly adventure in the grand old style of Enid Blyton! Cast yourself back to the 1940s when houses cost thruppence, snuff was tuppence, and getting a tongue sandwich cost wuppance. The stellar cast improvise entirely new adventures daily using your suggestions and inspiration from the Blyton classics; Mallory Towers, Famous Five, Faraway Tree and Noddy! Expect mystery, mild peril, rambling castles and bumbling baddies! Created by the people behind Chortle award-winning Austentatious and 5-star sell-out Upstairs Downton and featuring members of The Beta Males and The Maydays.

Precisely 60 years after Mrs. Blyton started legal proceedings to quash rumours that she didn't employ ghostwriters, the cast of improvisers narrowly avoid plagiarism by creating a new story each day inspired by the audience's drawings.

"With her books still selling around 8 million copies a year and with over 750 to choose from, Enid may have written for children, but her stories still delight grown-up children around the world," says Amy Cooke-Hodgson, co-creator of the show. "With the audience's help there's no telling what kind of stories we'll discover each show. After all, her work was banned from more public libraries than those of any other author, so a little creative license and a lot of laughs are par for the course!"

The picnic's packed, the eggs are hard-boiled and mother's provided the ginger beer. So brace yourself for a jolly romp through 1940's nostalgia where it's always the summer hols and adventure lies around every corner!

Alison Thea Skot - Funny Women Finalist, BBC Radio 4's So On and So Forth, The Free Association.

Jinni Lyons - Jinni Lyons is an Only Child (US tour), Destination (Podcast).