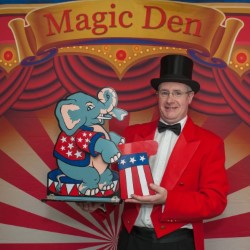 Magic performed on the following days in August 2015...

Roll up, roll up, Magic Den presents The Magic Circus, an exciting, fun, fast-paced and colourful magic show suitable for all the family. Everyone from 3-93 is sure to love The Magic Circus. Coming to the Fringe? Bringing the kids? Why not treat them to some late morning magic to start off your great day in Edinburgh. Lots of magic, lots of comedy, and prizes for helpers. This is an interactive show so get in early as you could be a star in The Magic Circus.