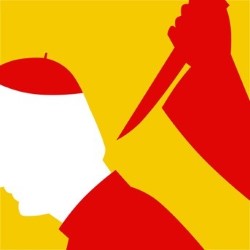 Cardinal Sin delves into the dark (or at least rather mauve-ish) world of papal intrigue and mystery in an hour-long comedy romp through the Sistine Chapel. Gasp at the tragic murder of a beloved cardinal! Cheer for our brave and intrepid heroes! Be at least partially satisfied with their madcap antics! Will the assassin be caught? Can the detectives do the detecting thing? Why don't they just call the police? Find out in this comic twist on the detective genre, which is guaranteed to bring a smile to at least three faces - don't miss out!