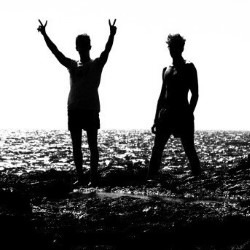 From the writers of the Footlights International Tour Show 2014 comes a triumphantly fun new double act. Jamie Fraser and Alex MacKeith serve up a lunchtime special of fast flowing sketches, freeform conversation and catchy tunes. Come for the chuckles. Stay for the duration, please. 'A real highlight of this Fringe's comedy line-up' ***** (ThreeWeeks). 'Fast, funny and something for everyone' ***** (Tab.co.uk). 'Cleverer than you think' **** (Skinny). 'If you're choosing one show to represent the breakneck-paced sketch genre ... make it this one' **** (List).

Following last year's packed-out run on PBH's Free Fringe, Jamie and Alex are bringing a surreal, intelligent, and unwaveringly silly hour of comedy to Just The Tonic @ The Caves.

This year, the pair have performed alongside the likes of Simon Munnery, Harry Hill, Liam Williams, Phil Wang, Lolly Adefope and Rhys James. And they gave them a bloody run for their money, if we're honest. They also run a monthly mixed-bill night called Crazy Science Stupid Magic, whose proceeds go directly to Parkinson's UK. They are, therefore, both good and nice.

Jamie Fraser is a writer, stand-up and sketch performer, as well as a recent graduate of the Cambridge Footlights. He has performed sketches and stand-up in Edinburgh, Manchester, London, Paris and Heidelberg and co-wrote and directed The Footlights International Tour Show, which toured both coasts of the United States. He has performed with Glenn Wool, Phil Wang and Liam Williams and is a semi-finalist in So You Think You're Funny 2015.

Alex MacKeith is a writer and sketch comedian who graduated from the Cambridge Footlights last year. In 2014 he wrote and performed in a dark comedy, Welcome Break, to rave reviews in Cambridge, and co-wrote and performed in the Footlights Tour Show: Real Feelings, which enjoyed a sell-out run in Edinburgh before playing at several comedy festivals across the USA. Previous Edinburgh shows include Dressing Down (Gilded Balloon, 2013) and Oresteia (C Venues, 2013). Current projects include scriptwriting C-12 Dance Theatre's latest immersive project, Watson, and another sketch show, Princes of Main which will run throughout the month at the Pleasance Courtyard. Alex is represented by Sue Latimer at ARG.