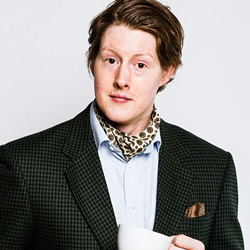 Luke Benson is approaching 30; are all the wheels coming off? Has the motor started working? He can't even drive! This year he looks at the expectations of society and how to meet them.

Two-time comedian of the year nominee, Luke Benson stars in his third stand-up show Luke Benson: Makes Something of Himself at Banshee Labyrinth during the Edinburgh Festival Fringe this August (last week only).

Luke Benson is approaching 30; are all the wheels coming off? Has the motor started working? He can't even drive! This year he looks at the expectations of society and how to meet them.

See an all-comedic (no big trauma bit this year), all-positive and empowering look at how to look at your life... Luke's appraisal of his life over the last 12 months/30 years, a panic attack, an adventure/education in self-help, a meeting with a Guru, warming up for strippers, mild alcoholism and being sold drugs by a gym instructor.

This is a road to Damascus tale - of biblical proportions!

Geordie giant, Luke Benson is an incredibly talented stand-up comedian, making waves on the circuit since 2007; having performed extensively in the UK and across the world: places including Scandinavia, the Balkans, Bahrain, Belgium and Luxembourg.

He has been a finalist in the Hackney Empire, Amused Moose, Leicester Square Theatre and Mirth Control competitions. He was also nominated for the Leicester Mercury New Comedian of the Year Award.

He's performed 2 solo shows at the Pleasance Courtyard, having previously featured in prestigious showcases: Big Value and The Comedy Reserve.

Luke has an incredibly appealing stage presence and his set is a mix of hilarious stories, original one liners and inventive word-play. He was a presenter with Shoreditch Radio and anchors the Newcastle Natter podcast. He has appeared on Channel 4, Channel 5, Radio 1, BBC 6Music, Radio 4, Capital Radio and Virgin Radio.