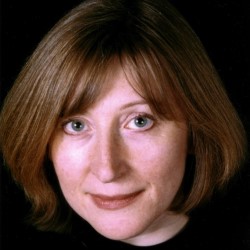 Jo Brand, Phill Jupitus, Mark Thomas, Susan Calman, Bridget Christie, Liz Lochhead, Arthur Smith, Jo Caulfield, Fred MacAulay and Angela Barnes. A special night of comedy celebrating the great talent that was Linda Smith. People will know of Linda, who died in February 2006, through her outstanding work on radio and TV. Voted wittiest person in Britain, 2002. Regular contributor to The News Quiz, Just a Minute, Have I Got News for You. She created and starred in her own radio sitcom, A Brief History of Time Wasting.

A stellar line up has been announced for this year's Loving Linda comedy gala, which will be held at the Edinburgh Fringe for the first time, in support of Target Ovarian Cancer.

Jo Brand, Phill Jupitus, Susan Calman and Arthur Smith, amongst others, will be performing. The evening will be hosted by comedian and presenter Fred MacAulay.

The event is in memory of Linda Smith, an outstanding comedian who regularly contributed to The News Quiz, Just A Minute and Have I Got News for You among others. Sadly, Linda died of ovarian cancer in 2006. Her friends in the comedy world remain dedicated to raising funds and awareness of ovarian cancer in her memory.

Susan Calman, an Ambassador for Target Ovarian Cancer, said: "Linda was a great inspiration to me, and I am delighted to be taking part in the event. Comedy is good for both the body and soul, and hopefully it will encourage more people to talk about ovarian cancer. This night is the perfect way to celebrate Linda and her work, and also raise awareness of ovarian cancer, which can be a devastating disease."

This is the seventh Loving Linda comedy gala to raise funds for Target Ovarian Cancer. So far, over £140,000 has been raised to support women throughout the UK living with ovarian cancer.

Susan Booth, Director of Fundraising for Target Ovarian Cancer, said: "We are very privileged to hold such a fantastic night in memory of Linda Smith, and we're very excited that the show is traveling to the Edinburgh Fringe for the first time. All the money raised will help us to provide vital information and support for women with ovarian cancer."

Loving Linda will take place at the Assembly Rooms, Edinburgh on Wednesday 19 August at 9.15pm. To buy tickets visit www.targetovariancancer.org.uk or call the box office on 0844 693 3008.