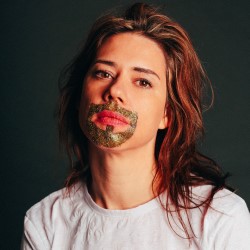 We've all had our penises sat on and this lady gonna talk about it. Finally, someone breaking the silence! More likely is that this is a show about a grown woman trying to get into Eton College for Boys. But I had to hook you in, and penises are just the ticket! Show is in full colour. Amused Moose Laughter Awards finalist 2014. 'Very, very funny' **** (Chortle.co.uk). 'Sanders nails it' **** (Time Out). 'Confident, daft and a refreshingly different stand-up' **** (Fest).

A show about one woman's crusade to get into Eton College for Boys. Never say never... cue hilarious anecdotes, real prank calls and an actual trip to Eton.

Award-winning, consistently Critic's Choice (Guardian, The Independent, Time Out and The Times) and lovingly tangent seeking Lou Sanders makes unforgettably offbeat comedy, flippantly throwing ideas and styles into the fray with assured confidence and child-like delight. She is back to smash up the Free Fringe as only she knows how... and break the silence around having your penis stood on (..or not)

Lou knows the only thing delaying her world domination is that she didn't go to Eton College for Boys, but they do say it's never too late.

Time to rectify this. Time to get her perfect anus enrolled in this school and change her life for the better. The show also touches (...ever so lightly and never explicitly) on class division, gender issues, LA and sexy dolphins.

Based on an original idea, adapted from a true story and inspired by real events, this will be Lou's most logical hour to date. With a strong narrative, Excuse Me, You're Sitting On My Penis Again, takes a more structured turn, whilst applying the same verve and originality as ever before.

Lou has appeared on Russell Howard's Good News and presented a regular radio show with Richard Herring. She has also appeared on Radio 4, BBC Radio, Absolute, XFM and Fubar. With a reputation as a comic's comic, Lou has written additional material for Miranda Hart's 2014 tour, two series of Channel 4's Stand up for the Week, BBC3's Laughtershock & various TV pilots. Go Faster Stripes recorded her previous show Lou Sanders in Another Great Show Again at the Soho Theatre - available to buy/download now.