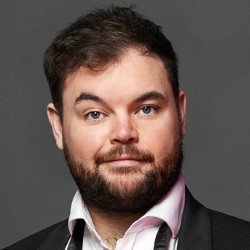 Lloyd Griffith is from Grimsby, and he's bloody proud of it. Last year he was asked to switch on the Christmas Lights in Grimsby Town Centre. Naturally, he was over the moon. He was about to achieve a life-long dream, though elation soon turned to heartbreak as Lloyd was told he was actually eighth choice for the job. In this show Lloyd does everything he can to prove why he's Grimsby's most talented export (and much better than the other seven chumps on the list).

As well as being a comedian, and a bit of a good looking lad, Lloyd is also a classically trained choral singer. He can be found regularly singing in the choirs of Westminster Abbey and St George's Chapel at Windsor Castle. Expect singing, dancing, flirting and facts about every Cathedral in England.

Lloyd's love of Grimsby Town FC goes beyond supporting them at the terraces. Just before Christmas 2014, his 'Grimsby Town FC Christmas message,' which was written and produced by Lloyd, as well as starring in it went viral and appeared in pretty much every news website.

In 2014 Lloyd made his solo Edinburgh debut at The Pleasance with Voice of an Angel, Body of a Trucker as well as leading the choir in Nick Helm's Two Night Stand in The Grand. Prior to this Lloyd performed in Edinburgh as part of the prestigious AAA Stand-Up showcase in 2012 and then the Big Value Comedy Showcase in 2013 as well as appearing in Charlie Baker's Baker's Dozen.