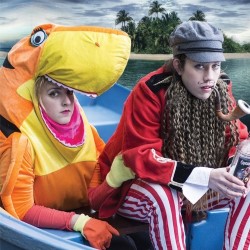 The superbly surreal, anarchic and charming comedy pairing of LetLuce are returning to Edinburgh with their new Fringe show for 2015: LetLuce in Sea Men (A Naval Tale). Join LetLuce as they voyage into the ridiculous with the cockle-warming tale of an unlikely friendship, set in the heart of The Atlantic Ocean.

The Captain has lost his crew, his map, his morale and his rum. Things are looking very bleak until he catches a rather unusual fish who will change his life forever. The Captain is on a quest to find The Potion of The Ocean but the Fish just wants to find true love. Both are desperate to get to River Island (the place, not the shop), so together they embark on a magical voyage chokka-block with curious characters and nautical nonsense.

Expect very funny and totally daft joy from Lucy Pearman and Letty Butler who have a myriad of comedy influences from The Mighty Boosh to Harry Enfield and French and Saunders.

Having met at LAMDA, Letty and Lucy were regularly cast opposite each other in both very serious and very non serious roles. You might recognise them from their appearances in the ad campaigns for Silverspoon's Truvia and Maltesers Teasers. They are currently developing a television pilot with Moxie Pictures, which will be directed by James Griffiths (Cuban Fury, Episodes, Up all Night) and produced by Claire Jones (Sightseers, Kill List).