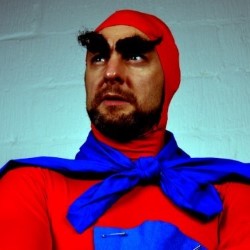 UK Pun Champion Leo Kearse, aka Pun-Man, is here to save humanity from observational comedy with a pun party! But he's having a bit of trouble adapting to your planet. If you like award-winning stupid jokes, interactive punning and a confused lycra-clad Scottish alien, then you'll love Pun-Man's Pun Party! What's the worst that could hear-pun? ('My mate's sitting on my pumpkin. He butternut squash it' is the worst.) 'A giant of the art' (Chortle.co.uk). 'Seriously good. Quick, funny, smart and hilarious' (Scotsman). 'Very funny' **** (List). 'Very tall and very funny' **** (ThreeWeeks).