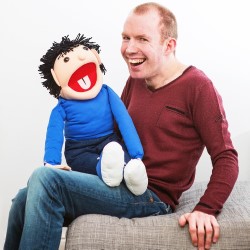 Can you really not talk? Have you considered an exorcism? Are you just in it for the parking? Have you ever tried talking just to see what happens? How do you have sex? Seriously, can you not talk at all? These are just a few of the bizarre questions that BBC Comedy Award winner Lost Voice Guy gets asked on a regular basis. Now he's decided to answer them all for you in his new show. Think of it as being like a disabled FAQ for stupid people.

Award winning comedian Lost Voice Guy is inviting comedy fans to take part in a stupid amnesty at the Edinburgh Festival Fringe this August, where he will host his new show Disability For Dunces.

And, to launch the stupid amnesty, he used a talk at Disability Awareness Day on Sunday to invite the general public to submit their questions about disability so he can finally put the record straight on a few matters in his show.

Disability For Dunces', will be at The Stand Comedy Club on York Place at 1.15pm from the 7th until the 30th of August (except Mondays) and will feature the bizarre questions that Lost Voice Guy gets asked on an all too regular basis.

Lost Voice Guy, real name Lee Ridley, from Newcastle-upon-Tyne, lost his speech as a baby when he developed Cerebral Palsy. He uses an iPad to tell his jokes and won the BBC New Comedy Award in December.

34-year-old Ridley said: "I'm often getting asked if I really can talk after my gigs, because obviously pretending to be disabled for the sake of entertainment is perfectly acceptable!? If I WAS going to do that, I'd probably pretend to be blind, so that my guide dog could shit on everyone who didn't laugh at my jokes.

"I've also been asked if I could still have a relationship even though I was disabled and someone once asked if I wanted a list of doctors who could fix me! Quite simply, I'm sick of dealing with stupid people, so I'm putting on this show instead. Think of it as being like a disabled FAQ for dummies (...or dunces for legal reasons!). I thought Disability Awareness Day was the perfect time to start to put things right.

"As part of my show, I will be inviting the audience to ask their questions as well. They can also ask me anything they like via email on lostvoiceguy@icloud.com. Don't worry about making a fool out of yourself, it's an amnesty after all. The more bizarre the question, the more likely it will be that I answer it. Hopefully the show will evolve over the festival as more and more questions get asked. The saying goes 'ask a stupid question, get a stupid answer', so as long as people don't expect me to actually educate them, then we should all have a laugh."

Since making his first stand-up performance in February 2012, Ridley has already gained quite a reputation for being both very funny and very unique. He has been described as "a wonderful comedian" by Little Britain's Matt Lucas. After supporting him on his warm up tour, Ross described Lost Voice Guy as "a very funny guy", Sean Hughes thinks he is "fantastic" and Greg Proops says that he is "tremendous".

Disability Awareness Day, which took place on Sunday 12th July, is the world's largest 'not for profit' voluntary-led disability exhibition, held annually in a huge tented village within the grounds of Walton Hall Gardens in Warrington. It is a pan disability event which promotes a can do culture focussing on what disabled people can do throughout life and work.