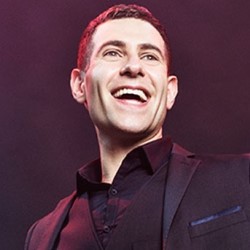 You may have seen him host Live at The Apollo or caught him singing on The X Factor. Now Lee Nelson returns to the place where it all started. Only this time he's bringing a new look, a new outlook and a brand new show this overpriced, overlong festival. 'Comedy legend' (Sun). 'Never less than ingenious... A seamlessly entertaining touring show' (Times). 'Comedy genius' (Daily Mirror).

Following the spring leg of his 68-date nationwide tour, Lee Nelson brings his brand new live show, Suited & Booted, to Edinburgh this summer. With 26 shows at the Pleasance Cabaret Bar, Edinburgh Festival goers can experience this cheeky chappy as they have never seen him before...swapping his shorts and baseball cap clobber for a more mature look, and an outlook to match. Now suited and booted, a more thoughtful Lee has begun to engage with life outside his estate and is grappling with bigger issues, offering his unique spin on religion, politics and immigration.

You may have seen character comedian Simon Brodkin making countless national headlines, pushing the boundaries and blurring the lines between his fictional characters and the real world. Most recently, he Kanye'd Kanye at Glastonbury, and gatecrashed The X-Factor (ITV) stage dressed as the ninth member of boyband Stereo Kicks. As Premier League footballer Jason Bent he has warmed up with the Manchester City squad at Goodison Park and addressed waiting reporters outside court still in character following his appearance in front of a judge; joined the England World Cup squad at Luton Airport as they flew out to Brazil; and duped reporters into thinking he was signing for QPR in Sky Sports' transfer deadline day coverage.

Acclaimed character comedian Simon Brodkin is the writer and star of BBC Three's ratings success Lee Nelson's Well Good Show and Lee Nelson's Well Funny People. Lee has hosted and twice appeared as a guest on Live at the Apollo (BBC One), and has also appeared on Sunday Night at the Palladium (ITV) and The John Bishop Show (BBC One), as well as releasing a live DVD. In autumn 2013, Lee toured the country with his third stand-up show and a second appearance on Let's Dance for...Comic Relief (BBC One), where he made the final. Last year Premier League footballer Jason Bent hosted his own World Cup show, Jason Bent's Greatest Ever World Cup Goals, Ever! (BBC Three) and more recently he starred in The Football's On (BT Sport). Simon's additional television and radio credits include appearances on Channel 4's Comedy Gala; Absolutely Fabulous (BBC One) and Children In Need (BBC One). Simon also wrote a weekly column in the News of The World as Lee Nelson. He has had three previous sell-out tours and has taken five hit solo shows to the Edinburgh Festival Fringe, where he won the Writer's Guild Award for Best Newcomer.