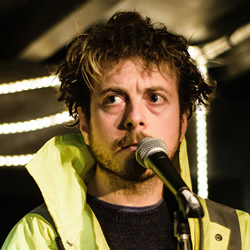 Comedy performed on the following days in August 2015...

Top Joe is a timid character who wears a hi-vis jacket and only comes out at night. Occasionally he braves leaving the house in order to create edge of your seat performances that involve confusion, 80's power ballads, a cassette player and vintage photography. Don't miss it, man.