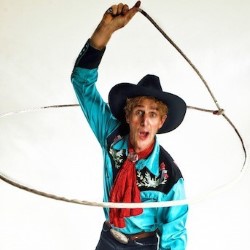 Wild west action comedy straight out of Portland, Oregon. Slapstick cowboy superstar Leapin' Louie throws a giant lasso, cracks a crazy whip, and makes audiences roar with laughter in 30 countries worldwide. Scotland makes 31. Kids get roped, play instruments, and have big fun. 'The man is freaking amazing. The crowd lost it after every one of his acts - from the 20-foot diameter lasso he swung overhead while riding a super-tall unicycle, to the bullwhip he cracked at the front row's faces. I'd see this guy perform again in a heartbeat.' (Portland Mercury).