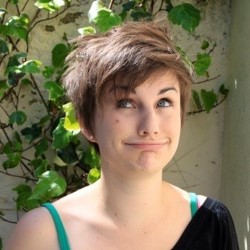 A charming debut hour about finally coming to terms with being happy. Join 'one of the most delightful performers you're ever likely to see' (GQ) on an expedition across continents with David Attenborough, to the depths of despair via Walt Disney and to sincere satisfaction courtesy of pesto. Overcoming the difficulties of living somewhere great and a really straightforward relationship to find comedy where comedy is. Paramount and Chortle Student Competition finalist Laura Lexx packs 'real comedic steel' (Guardian Weekend) into a refreshingly uplifting hour of celebratory comedy.

How are you meant to write an Edinburgh Fringe show when everything in your life is going great? Well, after figuring out that her life is actually going well, Laura Lexx has had to do just that. A show about being happy, loving life and the little things in it, join Laura as she brings a refreshing debut hour of uplifting and celebratory comedy with her Somerset charm to the consistently dreich city of Edinburgh.

Happy-go-lucky Laura Lexx is filled with unbridled optimism and glee. After reaching the finals of the Paramount and Chortle Student Comedy Awards in her first year, Laura has built on her success and gone on to perform around the UK and throughout Europe at several festivals as well as tour support for Russell Kane's Posturing Delivery tour. In 2010, she was a finalist in the Funny Women competition and was selected to compete for the BBC New Comedy Award in 2012 and 2014. She has had previous success at the Edinburgh Festival Fringe after developing the brand new panel show Quiz In My Pants, which delighted both acts and audiences equally.

Laura is also an accomplished actress having studied drama and theatre at the University of Kent. She received outstanding praise for her role as Cecily in The Importance of Being Earnest during the 2013 Brighton Fringe. As a writer, Laura has produced articles for Standard Issue magazine as well as her own popular blog and two stage plays. She is currently working on her first full-length novel.