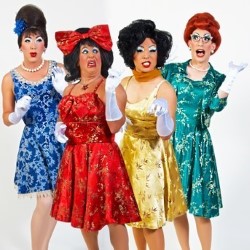 An unforgettable hour of "dragapella" - their very own unique take on a cappella - filled with stunning 4-part harmonies, wicked parodies, brilliant original songs and over-the-top drag! So join our four lovably bizarre heroines, Rachel, Winnie, Trixie and Trampolina in reality TV hell as they compete at challenges involving dating, dieting and, of course, animal tricks. What outlandish surprises await them - and you?

The Kinsey Sicks were, in fact, contestants in Season three of America's Got Talent. Their first performances brought standing ovations from the audience and gushing praise from both Sharon Osbourne and Piers Morgan (the only thing they agreed on that year). A Kinsey Sicks performance was even used as the Season three trailer. However, once show producers caught wind of the Kinseys' brand of politics, sense of humour, and personal hygiene, the group were cheerfully shown the door and the performance footage was left on the cutting room floor. This show brings the group's firsthand knowledge of the reality show experience to bear, poking fun at the genre's blatant manipulation of contestants and audience alike - but, of course, all in effortless 4-part harmony!

The Kinsey Sicks began in 1993 as a group of friends who went to a Bette Midler concert in San Francisco dressed as the Andrews Sisters. They began singing and harmonizing that night, and the seed for the group was planted. Since then they have toured internationally and have drawn the attention and devotion of unexpectedly diverse audiences. Their critically acclaimed Off-Broadway hit, Dragapella! Starring the Kinsey Sicks at New York's legendary Studio 54 received a nomination for a Lucille Lortel Award (the Off-Broadway Tony) as Best Musical and a Drama Desk Award nomination for Best Lyrics.