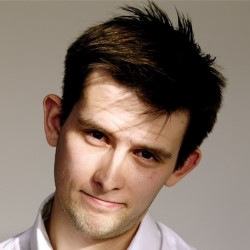 In 2003 Lance Armstrong won his 5th Tour de France title, and a young boy in West Yorkshire believed in him. Now a character comedian, he (the boy) returns to the Fringe with a heartfelt and hilarious story of growing up, betrayal by professional athletes, and redemption. Star of What the Future, The Lentil Sorters (BBC Radio 4), not star but definitely in Siblings (BBC Three), Count Arthur Strong (BBC Two), Alan Partridge: Alpha Papa. 'Top five of the Free Fringe 2014' (Times), 'Elegant and impressive...really funny' **** (Fest), 'Hodgson is delightful to spend time with' (Guardian).

In 2003 Lance Armstrong won his 5th consecutive Tour de France, an achievement watched by a young and impressionable Kieran Hodgson from his West Yorkshire home. Now an acclaimed character comedian, Hodgson returns after a sell-out run in 2014 with French Exchange, with his new show Lance, the hilarious story of growing up and moving on in the wake of a betrayal by your hero.

Lance traces Kieran's experiences growing up and sees him embody his best friends in the Boy Scouts, reliving the years spent with them on his bicycle, as well as some of the colourful characters he met once he moved down South. This lively personal narrative is tied together through a representation of his fallen hero, Lance Armstrong, culminating with the Tour De France's incongruous arrival in Yorkshire last year and Lance's exposure and public humiliation.

As well as displaying his impressive and hilarious character comedy, Hodgson has appeared in BBC's Jonathan Creek and Count Arthur Strong as well as the box office smash Alan Partridge: Alpha Papa. Kieran recently filmed a role in Channel 4's The Cloud - Graham Linehan's new pilot also starring Adam Buxton and Jamie Demetriou - and has a guest role in series 2 of the BBC Three hit comedy Siblings. Kieran is also a regular on BBC Radio 4 in shows such as What The Future?, Newsjack and The Lentil Sorters with Vincent Franklin. He also received great reviews for his portrayal of Jonathan Harker in Nick Mohammed/The Invisible Dot's Dracula! Mr Swallow - The Musical at both the Pleasance in Edinburgh and the Soho Theatre in London. Kieran is also a very talented writer who has television projects in development with Kudos, What Larks and Little Rock.

So watch as Hodgson narrates his way through a Tour de force of weird and wonderful characters in a coming of age story filled with betrayal and redemption bound to leave you laughing.