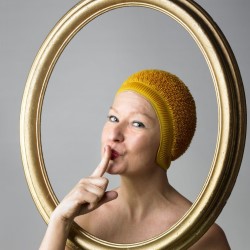 Actor comedian Kate Perry performs her solo character comedy show featuring six costumes, two pairs of glasses and a rubber hat. Her monologues showcase the absurdity and pathos of life whether it's an Amish woman with Ikea envy, a digital 'digilante' or a precocious 12-year-old who decides to save her amphetamine addicted mother by taking control of her medication. All are portrayed with chameleon-like skill, comedic flair, dignity and charm. It's going to be a Very Perry experience!

The show introduces a series of 6 character monologues written and performed by Kate. A single random object including a whistle, a pair of goggles and a can of WD40 inspire each character.

The material is original and showcases the world through Kate's very Perry perspective and always with a dash of humour and a wee sparkle in her eye. The result is a piece of fresh comic writing featuring unique personalities from across the human spectrum.

Among Kate's wonderfully realised characters are Mary Peachy-Bender, an Amish woman with shoofly pie and house envy, Susie Hedley-Simmons, an unsupervised child dispensing pills to her amphetamine-addicted mother and Carmel explores our obsession with celebrity culture, the frayed relationship between a mother and daughter and ultimately how we treat the elderly. We laugh, but it raises serious questions.

Kate Perry is originally from County Tyrone, Northern Ireland and immigrated to San Francisco where she started her writing/performing career. Kate's previous work includes Do No Adjust Yourself, which was presented at the Dublin Fringe Festival and subsequently commissioned as a series for Woman's Hour, BBC Radio 4. Since then she has been awarded continual commissions from the BBC. Tamsin Greig, Conleth Hill, Doreen Keogh and Tracy Ann-Oberman have all performed Kate's work.