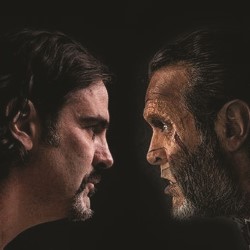 Captured by mercenaries on Africa's Gold Coast and imprisoned in a cage, Redpeter's only chance of escape was to himself become a walking, talking, spitting, hard-drinking member of the peace industry. Now for the first time, before you the shareholders, the primate and keynote speaker reflects on his journey from apedom to humandom. 'Fascinating, provocative and funny. Don't miss it' (Montreal Gazette). An unnerving satire on otherness and the growth of private military companies, inspired by Franz Kafka's short story Report to an Academy. Adapted and directed by Guy Sprung. Starring Howard Rosenstein.