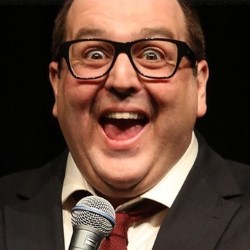 Justin is back to charm the Fringe. Expect big laughs and a great night out from this comedic powerhouse. From BBC One's Live at the Apollo, a regular on 5 Live's Fighting Talk and TalkSport, and the record breaking Phoenix Nights Live show for Comic Relief 2015. 'A guaranteed hour of laughs' (Chortle.co.uk). 'Moorhouse charms the pants off the crowd' (Sunday Times).

In the last year Justin has killed three animals unintentionally, had part of his body removed and started to dress like a toddler - mid life crisis? Maybe. Funny? Definitely.

Hitting 45 and coincidentally matching his waist measurement Justin has taken a long hard look at his life. He reckons he's hit half way, he's reached the peak of the roller coaster and what next? Do we give up and let the ride take us to where it's going to take us? Or do we grab hold of the rail and enjoy the thrilling descent?

2015 has already been a busy year for Justin reprising the tiger faced Young Kenny for the record breaking run of Phoenix Nights Live at the Manchester Arena which raised over £5m for Comic Relief. He also wowed the nation with tales of Australia and Manchester on Live at the Apollo (BBC1) during this last series after previously appearing several times on The Comedy Store (Comedy Central), Dave's One Night Stand (Dave) and Michael McIntyre's Comedy Roadshow (BBC1). He has written and starred in two series of Everyone Quite Likes Justin (BBC Radio 4) as well as helming his own podcast About 30 Minutes, No More Than 45.

With Les Dawson as his specialist subject, Justin won Celebrity Mastermind champion (BBC1) and is also the 2014/15 Champion of Champions on Radio 5 Live's Fighting Talk.

He's not just a writer, comedian and general quiz show off he's also known to have done a bit of acting. Appearing recently as Dean Upton in Coronation Street (ITV1), the previously mentioned Young Kenny in Phoenix Nights as well as appearing alongside Eric Cantona in Ken Loach's 2009 film Looking for Eric.