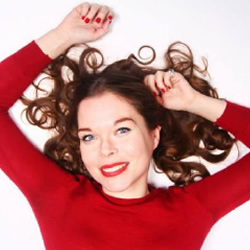 In an uplifting hour of comedy and chat, Juliette Burton will be joined by brand new guests every day.

Let's get happy! Award-winning performer Juliette Burton invites you to her Happy Hour: guaranteed to make you smile or your money back!*

In an uplifting hour of comedy and chat, Juliette will be joined by brand new guests every day. Guests confirmed so far include Doug Segal, Bec Hill and Stephen Bailey. Previous guests include Alexis Dubus, Sophie Hagen and Lost Voice Guy. See the best of the Edinburgh Fringe in one show and start your day happy!

(*Entry: free. Pay-as-you-feel and we hope you feel generous!).

Juliette has performed 2 sell-out, critically-acclaimed shows, When I Grow Up and Look At Me, at the Edinburgh Fringe. Look At Me won the Argus Angel Award for Artistic Excellence at the 2015 Brighton Fringe and was nominated for The Skinny's Talk Of The Town Award at the 2014 Edinburgh Fringe. The show also featured in John Lloyd's QI coverage for the BBC that year. Juliette has toured both shows around the country as well as performing When I Grow Up at the Adelaide Fringe and Melbourne Comedy Festival.

Juliette's TV and radio credits include This Morning (ITV), Skin Deep (BBC Radio Scotland) and Feeling Kind Of Funny (BBC Radio Scotland). She is also a spokesperson for the Be Real campaign and acts as an ambassador for the charities B-eat and Mind. In 2014 Juliette presented at the inaugural Body Confidence Awards held at the House of Commons alongside Gok Wan, Viv Groskop and Jameela Jamil, and hosted the TEDxWarwick 2015 Talks event at Warwick University.