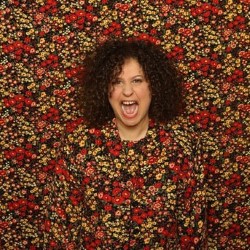 It's about time that Juliet Meyers became a household name, and that time is the Edinburgh Festival 2015! Having slipped under the radar for far too long, this year will see Juliet prove herself to be one of the strongest performers in the industry today.

Juliet Meyers doesn't belong. Do you? Are you sure? This brand new hour is a hilarious exploration of labels we assign ourselves and others.

Bad Jew (more a self-loathing atheist), ex-vegan, non-mum (apart from her evil imaginary son Carlitos), child of an immigrant (her father is an Iraqi-Jew), rom-com hating (why do all the women in them have to be kooky?), Juliet has tried to blend in more since coming second to last in a Miss World contest at school when she was 9 and then being forced to dress as Barbra Streisand for 'Diversity Day'. The idea of 'community' and finding her tribe has always appealed, but now she's not so sure and doesn't want to be pigeonholed.

Join her as she discusses people we idolize, class, smug therapists, Mumsnetters, vs UKIP, regionalism, music snobbery, group rivalries and who counts as 'alternative'.
Having already established herself as a comedy writer, working on shows such as The Sarah Millican Television Programme, Mock the Week and News Quiz, Juliet has most recently contributed to Listomania on BBC Radio 2. She featured twice in the Edinburgh Festival's Top 100 Jokes and sold out her 2014 show Unchained Biro at the Melbourne International Comedy Festival. She is also a regular contributor to Standard Issue Magazine.

Juliet will also be appearing in The Immigrant Diaries at the Assembly Rooms.