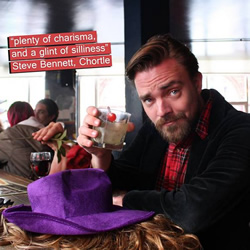 Following a sold out show at The Proud Archivist earlier this year - and a run at The Camden Fringe, Jonathan Hearn further enhances his solo stand-up show - previously titled Jonathan Hearn's Bits - for the Edinburgh Fringe 2015. Expect red wine, jokes, wildly inaccurate stories, puppetry, a few ditties, a short play and a measure of brandy.