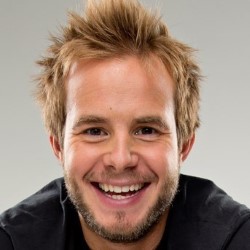 Jimmy McGhie flies through Edinburgh like a Winged Goddess of Victory with his fifth solo show. Confronting masculinity, mortality, the sins of the father and his complete inability to resist a good salesman. Along the way he encounters some vicious anti-corporate satirists, and explains how various early childhood humiliations made him what he is today: a clown. If you are an adult who still rides a skateboard, you should probably not come to this show. Jimmy performs to great acclaim across the world and has been described 'tediously handsome' (Fest).

Described by Fest Magazine as being 'tediously handsome', Jimmy is addressing the idea of masculinity in his latest comedic outing. Convinced that early childhood humiliations have shaped him into the clown he is today, Jimmy explores the idea of his own mortality, the sins of the father and his inability to resist a good salesman, as well as encountering some vicious corporate satirists. If you are an adult who still rides a skateboard this probably isn't the show for you.

Jimmy has performed on BBC Three's Live at the Electric and Russell Howard's Good News, as well as co-hosting the Dave Gorman Radio Show for Absolute Radio. As well as being Fringe regular, he has performed at the Melbourne International Comedy Festival Gala twice and was previously nominated for the Chortle Best Compere Award in 2011.

Starting out as a stand-up in 2005 Jimmy soon reached the finals of the BBC New Talent Competition. He is a featured favourite in a number of UK comedy venues including The Boat Show and The Comedy Store and has recently toured supporting Chris Addison and Simon Bird.