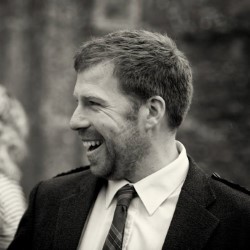 It's town meets country as the Perthshire farmer performs his debut Edinburgh Fringe show. Using a varied range of characters, regional accents and impressions with the occasional sheep based pun, Jim tells tales of living and farming in rural Scotland and gives the audience an insight on how this north country boy sees the outside world. It's no holds barred with controversial views on many taboo subjects such as attending young farmer dances, tractor envy and the village hall beetle drive doping scandal of 1998.