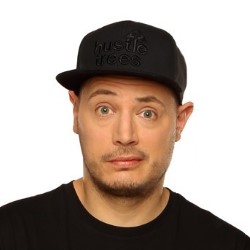 There are two girls in comedian Jim Smallman's odd little life: his precocious, entertaining eleven-year-old daughter with whom he shares ridiculous adventures, and his new wife, the love of his life, who happens to be a retired adult performer. This show is about them. Best New Show nominee, Leicester Comedy Festival 2015. 'Beautiful comedy from the stand-up who wears life on his skin' (Sunday Times). 'Unapologetically, shamelessly life-affirming' (Fest). 'An instinctive storyteller who draws out humour in every anecdote. On the comedy spectrum, he falls between Frank Skinner and Dave Gorman' (Chortle.co.uk).