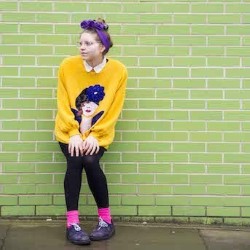 This is a show about: Love? Becoming a mother! Exes (all names may not have been changed). A stage version of Jessie's illustrations. 'A charming hour of character comedy and loving literary silliness.' (Independent). 'Cave has charm and an infectious enthusiasm' (Evening Standard). 'Great energy, wit and affection' (ThreeWeeks). 'A fun, quirky, tumultuous hour' (Chortle.co.uk).

Star of Harry Potter, Pride and E4's Glue Jessie Cave returns to the Edinburgh Fringe with brand new show I Loved Her.

Actress, writer-performer and artist Jessie made her comedy debut at the Underbelly in 2012 with Bookworm, which The Independent described as 'a charming hour of character comedy and loving literary silliness' and the Metro called a 'splendid fringe debut' as she guided audiences through her love of literature - from Babar to The Chronicles of Narnia via Andre Agassi's autobiography. The show subsequently had two sell-out runs at the Soho Theatre.

In acting, Jessie has appeared in a string of hugely successful projects. She played Lavender Brown in the Harry Potter film series, starred in Mike Newell's adaptation of Great Expectations, appeared in the BAFTA award-winning Pride and was a regular in Jack Thorne's acclaimed E4 series Glue. She will appear in Matteo Garrone's feature film The Tale of Tales alongside John C. Reilly and Salma Hayek which premieres at Cannes this month.

She recently released her debut book (published by Ebury), Love Sick, a collection of confessional, funny and often brutally honest daily doodles that cover all the aspects of liking someone, dating, falling in love, friendship and breaking-up. They are born from the confusing and often embarrassing moments, feelings and situations that every woman faces in her day to day dating life. Publisher Jake Lingwood said: "I think Jessie's doodles are really amazing. They're maybe what you'd get if you forced David Shrigley and Modern Toss under pain of death to draw the Love Is cartoons... and, frankly, they just make you laugh out loud."

Jessie currently has scripted television projects in development with Kudos, NBCUni and What Larks and she is also developing online content with Eleven Films and making the web series CHOP LOGIC with Alfie Brown. Jessie also regularly uploads new comedy videos and daily doodles on her website www.pindippy.co.uk and on @pindippycave. Having given birth to her first child in late 2014, Jessie is also passionate about supporting and championing young mothers, with strong views about breast pumping and breastfeeding in public which she is also developing a project about.