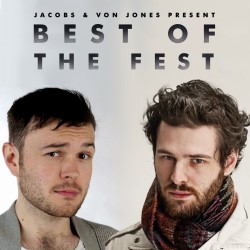 The freshest bad boys of the East London comedy scene present to you an array of superlative comedy talent and show snippets for your pleasure. This year's line ups will include household names such as Trevor Lock, Russel Hicks, UK pun champion Darren Walsh and HBO's Darius Davies. Seen the rest? Now see The Best of The Fest! Brought to you by TV's Joe Jacobs and David von Jones. As if that wasn't enough there will also be free biscuits for the whole audience!