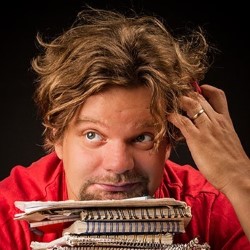 Winner of Laugh Factory's Funniest Person in the World 2014; Finnish comedian Ismo brings his unique gift of seeing the hidden obvious to the Fringe. He reveals the simplest of things that have for so long been lurking in plain sight. All this with a second language (it's English, don't worry!). **** (ThreeWeeks), 'for a man speaking his second language, Ismo Leikola is uncannily incisive, charismatic and entertaining.' **** (Dubliner) 'Scandinavian Mitch Hedberg; an oddball with a few extra twists' **** (List).

Ismo brings us his unique gift of seeing, hearing and understanding the world around us to the fore as he pulls apart the subjects in our everyday lives and finds the funny hidden in plain sight. Expect a hell of a lot of 'o yeah' moments and even more laughs from one of Europe's most accomplished comedians.

Ismo is a travelled comedian having performed across the world in places such as Germany, Iceland, Spain, Australia, New Zealand, UK, Singapore and USA, where he won the Laugh Factory's Funniest Person in the World award in 2014, and of course his own native Finland where he is one of the country's most successful stand-up comedians. There, he has had four nationwide concert hall tours and has appeared in numerous TV shows including Totus Rakkaudesta (TV1), Naurun Tasaino (TV2) as a judge with a special performance for the final episode, the Finnish reboot of Have I Got News For You, Uutisvuoto (TV1) and is currently filming his own fictional comedy series Ismo (Elisa viihde) about his life, which will air in September.

His first DVD release Good Gig and Helluva Lot of Extras went platinum while his second release Ismo Leikola Grows as a Person sold gold right after its release. Ismo also performs comedy songs with a band formed of some of Finland's leading musicians and has released three singles, Pendolino, Mitä jos me silti voitetaan and Moottoritie on kesken.