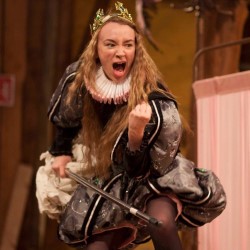 William Shakespeare, reincarnated as a woman, finds herself in a mental asylum and comes to the conclusion that she has made a complete mess of writing Hamlet, 400 years earlier. Armed with a quill and beset by a rebellious cast of characters who are anxious not to be rewritten, she embarks on an epic reformulation of theatre's most famous text under the new title of Opheila. Unfortunately, William's therapist is unsympathetic. Is that because he is also a reincarnated Christopher Marlowe, consumed with envy that has been festering away since 1597?