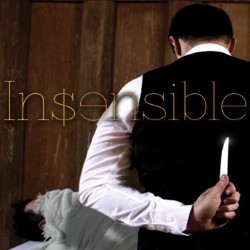 If you could eradicate the world of pain, what would be your price? A newly written comedy drama set in 1860s Boston, Massachusetts, USA. Based upon the true events from the life of Dr William Morton and his obsession to patent the world's first pain relief solution, reluctantly yet loyally assisted by his young British protege Nathaniel Jameson, whilst dutifully supported by his wife Elizabeth and their house-maid Mary. The debate emerges, befitting morality, decency and legacy; threatening the deterioration of family and friendship when desire for recognition and fortune take precedence.

In 2013, Matt Roberts & Tom Stabb with a joint disposition and mutual love of dialogue and comedy, not to mention a shared caffeine addiction, combined their efforts towards creating a focused and dedicated theatre company through the means of new and original writing.

With each production being funded 100% by cast and crew, the Middle-Weight Theatre Company made their debut with Sound Bite.
(Exeter, Bristol, Edinburgh FreeFringe 2013).

Insensible starts with the demise of a belovéd pet, ends in unavoidable ruin and the middle is only the beginning when dissecting the fascinating life of Dr. William Morton and his medical endeavours to patent the world's first anaesthetic; racing against the likes of Edinburgh's own obstetrician James Young Simpson!

With a cast of four in this one-room situation comedy drama, Middle-Weight Theatre Company use thoroughly researched and historically accurate events (with a hint of fiction), to provide a unique and entertaining perspective.

Returning to Edinburgh for a second stint, this time with their new and riveting show, Insensible, expect laughs, battles of wits, thought-provoking debates, unknown historical facts and the possibility of seeing a grown man getting spanked!