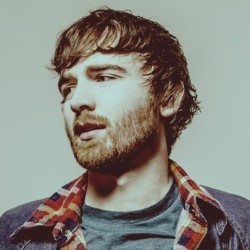 Award-winning comedian Ian Smith (BBC1's The Ark, BBC3's Sweat the Small Stuff) returns with his third hour. It's about whereabouts things are and whatabouts they're doing there. While others sleep, Ian is knocking back 35p energy drinks and searching for the answers. Big Smiddy's back with another hour of stories, talking and attempts at theatre. It'll be a lot of fun. 'Fantastically funny' (Times). 'A highly enjoyable show not to be missed' (ThreeWeeks). 'An hour of controlled madness, consistently intelligent and laugh out loud funny' **** (Skinny). ***** (ThreeWeeks). **** (Metro).

Join Ian for a hilarious hour of stories, silliness and shambling attempts at theatre. It's about whereabouts things are and whatabouts they're doing there. While others sleep, Ian is knocking back 35p energy drinks, spinning on his swivel chair and searching for the answers. This year he moved house, and has spent a lot of time looking out at the world and inside his head. He might even have stumbled across the unexpected whereabouts of true happiness.

At only 26, Ian has developed a reputation as one of the most exciting young acts on the circuit, with his conversational, energetic style and talent for improvisation.

His 2011 and 2012 Fringe shows, with Rob Beckett and Tom Toal respectively, received critical acclaim and were regularly voted amongst the top free shows of the festival. In 2013, Ian performed his debut solo hour, Anything, to sell-out audiences and gained a plethora of 4 and 5 star reviews - and a Soho Theatre run. His second show, Flappable met similar acclaim. Ian has performed stand-up on BBC Three at the Fringe and appeared on BBC3 panel show Sweat the Small Stuff, as well as being a warm-up artist for shows including Have I Got News For You (BBC1) and Would I Lie to You (BBC1).

Alongside his burgeoning stand-up career, Ian has worked on various TV projects. This year Ian had a leading role in major BBC1 drama, The Ark, and has filmed a part in series two of BBC2 sitcom Siblings. He's also recorded both series of Dave podcast The Magic Sponge, which now has over 2 million listens. In 2013 Ian had a lead role in BBC2 sitcom Popatron, appeared in Kay Mellor's BBC1 drama The Syndicate and starred alongside Katherine Parkinson in Sky's Officially Special. 2014 saw Ian film a guest lead in Comedy Central sitcom Give Out Girls. He also starred in two improvised comedy films, Benny and Jolene - which opened the LOCO London Comedy Film Festival - and A Wonderful Christmas Time. Ian has recently been picked up by Universal for a development deal.