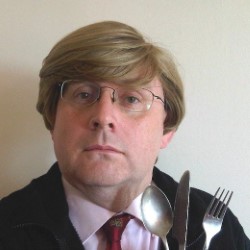 Do you know how to safely operate a butter knife? Do you know how to minimise injury from an unsupervised fork? Do you have spoon-sense? Health and safety really has gone mad, courtesy of comedy character Ian Crawford, an adviser from the Steel and Cutlery Manufacturers Association. What he has to share is deadly serious and you'd be forking mad to miss him! Performed by a former Curve Theatre Comedy Competition winner, Dave's Leicester Comedy Festival. Think once, think twice, think fork, spoon and knife.