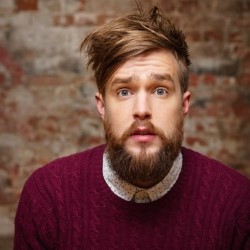 In case the last twelve months have passed you by entirely, there is no escaping Scotland has shaken up the political landscape in the UK; the referendum saw 16 and 17 year olds vote for the first time, celebrities stepped in publicly endorsing or opposing the Yes Campaign and Nicola Sturgeon made her stamp as she battled in the televised debate arena and continues to ride a tidal wave of popular support. Politics got sexy and, galvanized by the action, Edinburgh's very own double BAFTA nominated Iain Stirling is taking this to the stage in his brand new show Touchy Feely which he will perform for a month long run at the Fringe this August.

A well-known face on television, Iain most recently became the voice of Love Island (ITV2) alongside presenter Caroline Flack adding to a list of multiple credits including: performing on Russell Howard's Good News (BBC Three) and Russell Howard's Stand Up Central (Comedy Central), hosting his own Scottish BAFTA nominated (best children's show) panel show The Dog Ate My Homework (CBBC), joining the panel on Fake Reaction and Safe Word (ITV2) and Sweat the Small Stuff (BBC Three), and is currently developing a sitcom for BBC Three with Daniel Sloss. A regular voice on the radio too, Iain has made appearances on shows including The Now Show, Dilemma (Radio 4), The Josh Widdicombe Show (XFM) and recorded a Radio One takeover.

Iain burst onto the comedy scene whilst studying for a Law degree at Edinburgh University, reaching the finals of both the Paramount Funniest Student competition (2009), and the Chortle Student Comedian of the Year competition (2009) and has since performed three consecutive sold out and acclaimed shows, Happy To Be The Clown? (2012), Iain Stirling At Home (2013) and Everything (2014), at the Edinburgh Festival Fringe.

Just one week after graduating, Iain found himself on a train down to London to begin presenting on CBBC and just two years later he received a BAFTA nomination for Best Children's Presenter (2011) which was followed last year with another nomination in this category. A driving force behind the concept of comedy panel show The Dog Ate My Homework (CBBC), Iain co-wrote and hosted two series which had celebrity guests including Susan Calman, Romesh Ranganathan and MTV's Joel Dommett. Iain has written for, developed and presented a number of other CBBC projects, including: Help! My Supply Teacher Is Magic, 12 Again and All Over the Place. His love of football has led him to commentate for CBBC's Red Button Coverage of the World Cup and he has also appeared on CBBC's Match of the Day Kickabout and Hawksbee and Jacobs (talkSPORT).