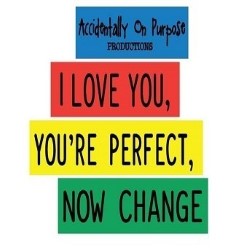 Everything you have ever secretly thought about dating, romance, marriage, lovers, husbands, wives and in-laws, but were afraid to admit. Accidentally on Purpose Productions returns for their third year, presenting I Love You, You're Perfect, Now Change. This hilarious musical comedy revue explores the ups and downs of love, romance and relationships. Starting with the awkward first date, wedding jitters, parenthood and growing old together, through hilarious scenarios depicting the age-old ritual of the suburban mating game. You've been there - you've done it - now watch the musical!