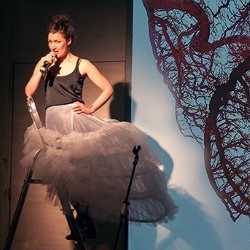 In 1885 Sarah Henley throws herself off a bridge. She lives. In 2015 Sarah talks about it and other things that push us over the edge. It is not about suicide, well a bit, it's about love and what it makes us do. Inspired by real heartbreak stories; some given, some found, some stolen. An act of public self-help, absurd melodrama and poetic meanderings around our perpetual preoccupation with this pumping organ. Winner of the 100 Jury Prize Berlin, I Gave Him an Orchid now makes its UK debut.

In 1885 Sarah Henley throws herself off a Bridge. She lives. In 2015 Sarah talks about it and other things that push us over the edge. It is not about suicide, well a bit, it's about love and what it makes us do.

Inspired by real heartbreak stories; some given, some found, some stolen. An act of public self-help, stand-up, clowning and poetic meanderings around our seemingly perpetual preoccupation with this pumping organ.

Based on the true story of Sarah Ann Henley, who in 1885, after a quarrel with her fiance, jumps off the Clifton Suspension Bridge but was saved by her parachuting crinoline skirts, which slowed her fall and landed her, alive, at the bottom of the ravine. After an eventful stay in hospital, she recovered fully and lived until the age of 84.

Moving from Henley to modern day explorations of love and heartbreak in all its forms, this show bounces happily along the boundaries of inappropriateness, u-turning into absurdist melodrama, recounts stories of people in and out of love and taps into our vulnerability, ours fears and needs. Inviting the audience to share their own tales and desires, I Gave Him an Orchid is ultimately a celebration of love, heartbreak and life.

What the Jury had to say: "The complex almost repulsive theme of love and love-sickness, which was discussed in every theatre nauseam, is a virtuoso of Sarah Calver; disturbing and honestly conveyed which leaves a non-digestible aftertaste. Medical explorations, biographical narratives, virtuoso rhymes, skillful games with reality and fiction and the entanglement of a chopped heart leaves us only one thing to say: 'Sarah, We love that you ... drank it all'"

FLIGHT OF THE ESCALES

Flight Of the Escales was founded by Sarah Calver to act as a platform for artists to get together, exchange ideas and practices and create inspirational, original theatre for local and international audiences.

With an aim to make theatre that questions the world around us and where we fit within it. We are interested in the human story; in our relationships, the mundane and the ordinary and how this transposes to be epic and extraordinary.

Our performances are a mash up of dark comedy and absurd surrealism, poetic meanderings and uncomfortable truths as we explore what it is to be us, now, then. We strive to develop the relationship between audience and performer and to challenge the conventions of performance status quo.

Sarah Calver is a performer, writer and director based between London and Berlin.

She trained at Lecoq and The Central School of Speech and Drama and has since worked with companies including; Fevered Sleep, Moving Dust, National Theatre, Offstage, Blind Summit (Fringe First The Table), Tangled Feet, Made in China, FanShen, GameShow and OVNV.

Carolina Ortega is a Venezuelan playwright, dramaturg and director living in Berlin. She studied at RADA, University of London and has trained with LISPA and SMASH Berlin.