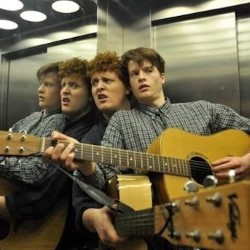 Music / cabaret performed on the following days in August 2015...

Musical comedy troubadours I am, I am are back for one night only. After their debut success in 2012, reaching the finals of the Musical Comedy Awards 2013 and triumphant sell-out run in 2014, these two bloody legends will be doing a best-of hour of fun. 'Already one of this year's Fringe highlights ... utterly hilarious ... this is an absolute must see.' ***** (BroadwayBaby.com).