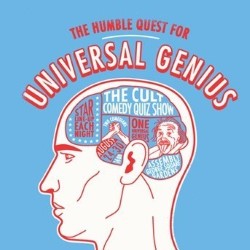 Panel show performed on the following days in August 2015...

The Humble Quest for Universal Genius makes a triumphant return to Edinburgh. Witness two top comedians going head-to-head against each other in an epic battle of ingenuity, wit and skill. The aim is simple: to find a true modern-day Renaissance Man or Woman. From art, science and languages, to poetry, mathematics and, of course, hunting, we will leave no part of the contestants' brains untested. It's been 500 years since Da Vinci and Galileo. It's time to find a new Universal Genius... 'The bastard child of QI and Shooting Stars' (Chortle.co.uk).