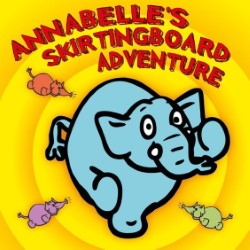 Annabelle is the world's smallest elephant, and her friend Icarus is a moth who loves bright lights and woolly jumpers. They become friends with Arthur (who is, disappointingly, just a normal-sized human man) and together they go on an adventure beyond all imaginings. An ordinary living room can be a place of danger and wonder if you're one millimetre tall. This mixture of animation, live video, comedy and song is brought to you by Howard Read - creator of the hugely successful Little Howard shows - and Steve Pretty of the Hackney Colliery Band.

Annabelle's Skirting Board Adventure is a brand new theatre show for young children and families produced, written and starring Howard Read, creator of the hugely successful CBBC and live theatre touring hit Little Howard. Uniquely for this Fringe, the show utilises live digital puppetry, innovatively combined with 6 video cameras, animation, film, comedy and live music, all created in real-time before the audience. It's ideally suited for ages 3-6 and their big friends.

Recent Ofcom research states that for three to four year-olds access to a tablet has risen in the past two years from 28 to 40%, and from 51 to 71% for five to fifteen year-olds. At the same time, theatre attendance by children has fallen by similar levels, with many preferring pixels to performance. Howard Read and Steve Pretty have developed a new show that combines a big screen and tiny cameras with live theatre and music. By using screen technology as an integral part of story telling, mixing live theatre with animation magically before your eyes they are opening the door to the world of live entertainment for the Minecraft generation.

Arthur is a children's entertainer, and one day he meets Annabelle, the world's smallest elephant and her cheeky friend Icarus the moth, who has a penchant for bright lights and woolly jumpers. Together they develop a dazzling new act, sure to wow audiences the world over. But when Arthur locks himself out, Annabelle and Icarus have to go on a wild and exciting adventure to get to the theatre in time. An ordinary living room can be a place of danger and wonder... if you're one millimetre tall.

Annabelle's Skirting Board Adventure is like no other kids show at the Fringe, and works on many levels. Children can immerse themselves in Annabelle's adventures, parents can appreciate the charm and wit of the story, and the more curious in the audience can marvel at the technology and spend the rest of the summer wondering how on earth it was performed.

Howard Read is a stand-up comedian, animator, writer and lyricist and highly regarded in writing and production circles around children's entertainment. The Perrier nominee has taken his cartoon creation Little Howard around the world, to the Royal Variety Performance, and beamed into millions of homes on CBBC.

Steve Pretty is best known as bandleader of the Hackney Colliery Band, and has lent his distinctive trumpet sound to the likes of Sam Smith, The Cure, Baaba Maal and Kelis. His own critically-acclaimed Edinburgh shows combining music, theatre and comedy have been described as 'original, intelligent comedy delivered with commendable panache.' (Fest)