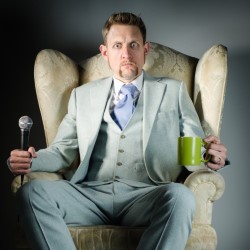 Modern man needs a positive role model, and Howard has the external genitals, a moustache and a suit. I think the solution should be obvious to everybody. Being a man isn't just about punching people when you're drunk it's about other stuff that Howard is going to think of between now and the first show. Howard Read is an award-winning comic, writer, animator, father and man (although he has never won any awards for the last two). No women were harmed during the making of this show.