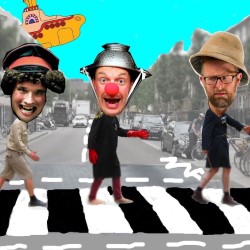 All aboard the Magical History Tour! A completely ridiculous and unofficial journey through the world of the Fab Four with the Helter Skelter comedy of the Honky Bonk Comrades. John Lennon famously said: 'You can only find truth through absurdity'. But could he handle the nonsense required to tell the real Beatles story? Strap in, it's gonna get weird. Hostorically accurate, 'Irresistibly funny' (Chortle.co.uk). 'Brilliant, inventive ... far beyond silly' (Londonist.com). 'Downright hilarious ... comedy that deserves to be commended for challenging the boundaries and creating an unforgettable experience' (BroadwayBaby.com).

A comically surreal, clown show inspired by the story and songs of The Beatles.

John Lennon famously said: "You can only find truth through absurdity". But could he handle the nonsense required to tell the real Beatles story? The Honky Bonks are up for the challenge.

Who was the Walrus?
Where is the Nowhere Man?
Do we really all live in a Yellow Submarine?

What's more this show will be performed on a double decker bus, so step right this way and join the completely unofficial and hostorically accurate Magical History Tour.

The Honky Bonks are a collective of modern clown comedians that all perform regularly on London's alternative comedy scene.

Dan Lees recently won a judges award for theatre at the Mimetic Festival in London for his solo show Brainchild, which he has performed in Adelaide, Prague, Leicester and Brighton and is on at the Underbelly this year.

Marny Godden of the cult comedy troupe The Grandees, also has a solo show Flap 'em on the Gate at the Underbelly.

Neil Frost recently had a sell out run of his solo show Anythings Possible, Nothings Available at the Prague Fringe.

Ben Whitehead is the voice of 'Golem' in the show of the same name from the acclaimed, ground breaking theatre company 1927 which is currently on at London's West End.