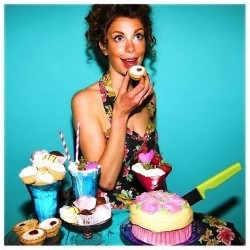 Award-winning Duff makes work that is "fresh, quick witted and supremely empowered". Offering explosive insights into areas of women's experience that many others daren't mention, Duff employs "laughter to create something far deeper."

Vanity Bites Back is a bold, subversive and funny clown-cookery show about searching for self-worth in a cheesecake, which delves into the complexities of mental illness and bites back at the silence and stigma surrounding anorexia. Join aspiring TV cookery host Jill - described as a cross between Alan Partridge and Margaret Thatcher - for her most exposing episode to date.

So sexy it's stupid, Smasher fearlessly thrusts into the lip biting, belly tightening, "what if I queef?!" qualms that hold us back from intimate connection. Inspired by Helen's experiences of lying like a lady and self-identifying as a sperm, Smasher squirms its way through the world of Facebook, #FOMO and filters and questions what it takes to come, as you are.

Helen studied at LAMDA, L'Ecole Philippe Gaulier and the University of Cambridge. Vanity Bites Back, her solo debut, premiered at the Edinburgh Festival 2014 to great critical acclaim, earning her a Fringe First nomination. The show was subsequently invited to open VAULT Festival 2015 (winning the 'Judges Pick' award) and programmed for the Melbourne International Comedy Festival and the Adelaide Fringe. Due to popular demand, the show returns to Edinburgh this August as part of Gilded Balloon's 30th Anniversary Celebrations, amid a UK tour and following a year that has also seen Duff win a place in the Foster's 'So You Think You're Funny?' Edinburgh semi-finals and the Squawker Award final at the Brighton Comedy Festival.