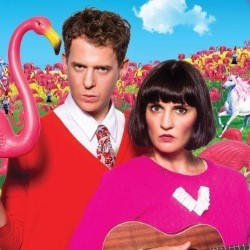 Multi award-winning duo House of Blakewell want to make you happy. They sing and dance their way through positive psychology, Greek philosophy and the 5:2 diet, but will they find what they are looking for? Featuring woodwind duels, dance-offs and original, toe-tapping showstoppers, this hilarious cabaret musical will make you feel slightly better about the world. Winner: Craig Barbour Award, Soho Theatre. Pick of the Fringe (TheNewCurrent.co.uk). Pick of the Week, Vault Festival, ***** (TheNewCurrent.co.uk). 'Hilarious, heart-warming theatre' **** (@EdFringeCritic). **** (BroadwayBaby.com). **** (WestEndWilma.com).

After taking VAULT, Brighton and Latitude Festivals by storm in 2014 the award-winning cabaret duo House Of Blakewell are at the 2015 Edinburgh Festival Fringe with their feel-good, comedy cabaret We Can Make You Happy at Bosco at Assembly George Square Gardens.

Alice & Harry have chosen to be happy. Alice is studying mindfulness. Harry is studying German existentialism. Together they sing and dance their way through positive psychology, Marxist economics and the 5:2 diet, but will the pressure to be constantly happy prove too much?

Award-winning composer / performer duo Harry Blake and Alice Keedwell perform their new playful musical exploration of happiness, the industry surrounding it and what it means in 2015. Drawing on a range of scientific, economic, philosophical and spiritual texts and popular culture, Harry and Alice will visit topics as wide-ranging as mindfulness, mental health, capitalism, bereavement, middle-class guilt and the wedding industry.

Boasting song, dance and musical virtuosity with woodwind duels, dance-offs and original toe-tapping showstoppers, We Can Make You Happy is an exuberant cabaret musical about the joys, struggles and pressures of being alive.

We Can Make You Happy is created and performed by Harry Blake and Alice Keedwell, with music and lyrics by Harry Blake. Harry is a composer, songwriter and musical theatre lover, known chiefly for his remixes of Don Giovanni and La Traviata (OperaUpClose, Soho Theatre). Alice is an actor, actor-musician and singer with theatre credits including The One Hundred and One Dalmatians (Castle Theatre, Wellingborough) and in Wind in the Willows (Lord Chamberlain's Men).