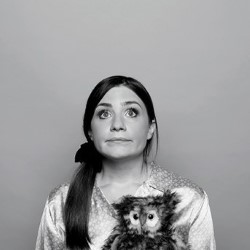 Harriet Kemsley thinks everyone is trying to kill her, or at least ruin her day. Because of a news-obsessed culture, an overactive imagination and a crippling anxiety disorder Harriet's list of worries is mounting and she's only just found out about Hiroshima. It's been this way for a long time. From checking for bombs in her bed when she was 9, to fearing what men will find in it aged 27, this young stand-up's childhood worries have made her into a PTSD sufferer without the war stories. Harriet decides it's time to face up to her worries in this hilarious debut hour.

Harriet was unusually encouraged to try her hand at stand-up by her parents, a decision that has actually turned out rather well since she took the plunge in 2011. She has amassed a wave of critical acclaim and award recognition including scooping the Bath New Act of the Year and Funny's Funny titles, and reached the finals of the prestigious New Comedian of the Year, Laughing Horse and Leicester Mercury Comedian of the Year competitions. Time Out have described her as 'a very funny new stand up', Chortle have highlighted her 'excellent writing' whilst The Independent added 'for an idea of what comedy's future might look like I look towards acts like Harriet Kemsley.'

Most recently she has been seen on BBC3's Comedy Marathon, Radio 1's Comedy Lounge and Funny Rotten Scoundrels on London Live, and supported Katherine Ryan and Stephen Merchant on tour. She will soon be seen in Matthew Hammett Knott's film Bonobo, alongside Tessa Peake-Jones and James Norton, which marks her film debut.

She trained with Phillipe Gaulier in Paris, following in the footsteps of Sacha Baron Cohen, Emma Thompson and recent contemporaries Dr. Brown and Daniel Simonsen, before moving to New York to study at the American Academy of Dramatic Arts.

"Harriet has a list of annoying food allergies but I still hang out with her. That's how much she makes me laugh" - Katherine Ryan