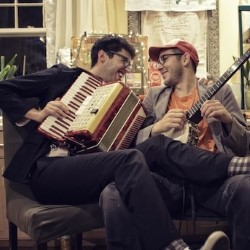 Direct from NYC, Gideon & Hubcap serve up their unique brand of Stove-Top Folk (on no fewer than ten instruments!), sharing tales of love, apocalypse and death-defying friendship through an ecstatic lens of musical harmony and magic. Gideon & Hubcap have toured over 300 of America's living rooms with this, their homemade home-show, and now welcome you into their world of belly laughs, outrageous stories and sad songs. Prepare to encounter New York's own 21st century vaudevillian duo!

Two New York guys, 10 instruments and 60 minutes of original music, tall tales and belly laughs. Forged in the smithy of surprise and living rooms across America (becoming a cult hit along the way), Gideon and Hubcap are delighted to arrive at the Edinburgh Fringe...

Known for their vaudevillian flair, Gideon and Hubcap present a slap-your-knee, grab-your-neighbour, un-tweet-able, home-made home-show which has been travelling across the States playing living rooms large and small - accompanied by quizzical instruments from around the world, personal stories, jokes and a joy for the world.

The Gideon and Hubcap Show is an imaginative, adventurous, uplifting example of what a theatrical experience can be... with a little help from friends. This intimate show now ventures into the Wee Coo to challenge all your expectations of what is possible within traditional performance spaces.

Having taken the show across America as well as the neighbour-phobic streets of their home-town New York City, it will now take up residence at the Edinburgh Fringe. They are coming to the world's biggest arts festival, not like most acts, intent of gaining the attention of bookers and promoters, but rather to meet new European and global audiences and extend their network of hosts for their intimate living room performances.